On Saturday, April 7th 2012, me and a couple of my friends attended Anime Boston, the 10th year anniversary! :) I had so much fun! I cosplayed as Lightning from the game Final Fantasy XIII. Her costume had its ups and downs, especially if you needed to use the restroom, which you basically have to strip. And the boots! The were comfy at first but wearing them over 6 hours is hurtful! I got a damn blister from them too! and they weren't cosplay boots they were my normal everyday boots! D: And around 10 at night, my legs began to kill. The next morning, it hurts to walk, and my shins felt like my bones were going to just rip out of my skin. DX

Anyway, I took over 300 photos, and at least 10 videos from the convention. I posted the images on my deivant art page. You can view them here: Anime Boston 2012

I am currently adding the videos to Youtube, and I will post them here when I have them all done.

But I shall leave you with this photo of me! :) 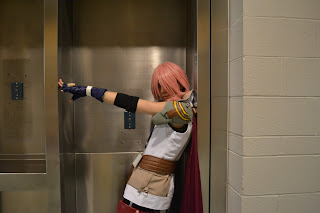